Frank's Roundhouse made 19 different regular production, and four special production, trailer on flatcar (TOFC) models. The flatcars are 10 ½" long, and hold one 7½" long trailer. The cars came in a plain white box, with a cellophane window on one side, and dark gray rubber stamped identifying data on both ends of the box. The flatcars are plastic, with one brake stand to which a brake wheel is attached. The flatcars match the ones used for the early MTH Electric Trains RailKing TOFC's. The only truck type found on these cars are the plastic Bettendorf trucks, with brake shoes and operating knuckle couplers, which were made by Mike Wolf exclusively for Frank's Roundhouse. Mike Wolf also supplied the trailers for the flatcars, which were made by Yatming, a manufacturer of die-cast model vehicles in China. The trailers are plastic, with two opening doors on the back end, and have a skeleton-type die-cast frame. The cars were numbered in three series of numbers - 9000, 9100 and 9400. The 9000 and 9100 series cars had the same road number printed on the flatcar as was stamped on the box, so these numbers can be used as both a road number and stock number. However, on the 9400 series cars, the road number appearing on the car is different than the stock number stamped on the box. Some of the trailers also have numbers. The 9000 series is documented on this page. Note that # 9013 was skipped in the numbering sequence. 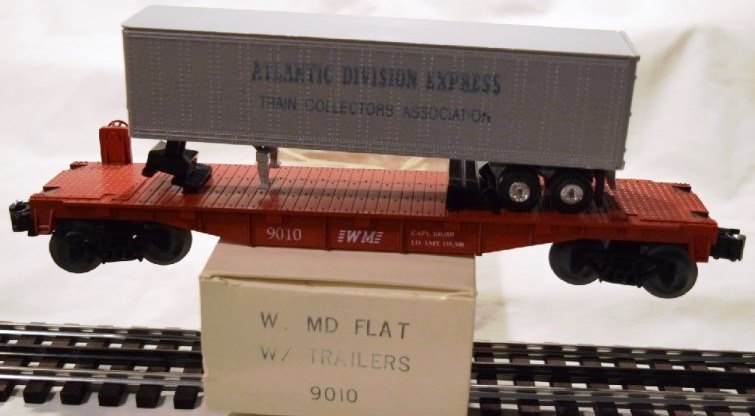 Western Maryland 9010 TOFC with an Atlantic Division Express Train Collectors Association
trailer. More information on this car is requested. Photo courtesy of the B. Fetterman collection.

Pennsylvania Railroad 9012 TOFC. Photo courtesy of the B. Trappen collection.