The photos on this page are courtesy of the B. Fetterman collection. 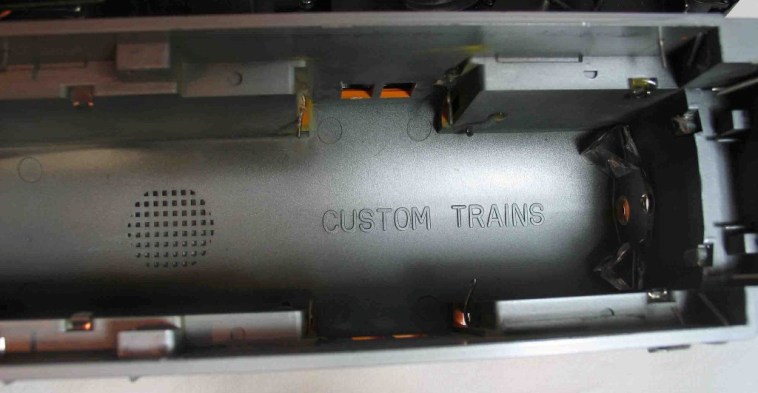 The FM cabs were new blank bodies, not redecorated. When viewed from the underside, the cabs will either have "Custom Trains" (as pictured) or "Williams Reproductions Ltd." "Williams Reproductions Ltd." is typically, but not always, scratched out. The Williams cabs were not obtained from Williams, but were left at the Korean supplier by Williams when they switched to a manufacturer in China. It's been observed that if an engine has a Williams shell, it will have the earlier large can motors without flywheels. A three-line label on the box end lists the engine road name and catalog number. An engine with a Custom Trains shell has the later improved can motors with flywheels and a four-line label on the box end shows the engine road name, catalog number and cab number. Single-line box end labels with a road name and cab number have also been observed.

Custom Trains FM Trainmaster box with description of locomotive features.
Note that "Custom Trains" does not appear anywhere on the box.