My grandpa, who lived in Ohio, had a large HO gauge Marklin train layout in a room in his basement. His layout was set up from the middle 1960's until his death in the late 1970's. The photos on this page were taken during the early 1970's. The photo below shows my Uncle Frank on the left, and Uncle Paul, studying something on the layout. In the picture are two Marklin steam engines and a green Marklin "crocodile" electric. The crocodile was my favorite locomotive on grandpa's layout. I recall all the motive power and the majority of rolling stock were European, with a few American boxcars in the mix. The gray plaster arch bridge in the picture was another favorite of mine, along with a scratch-built wooden trestle bridge at the other end of the layout (wish I had a picture of that one). 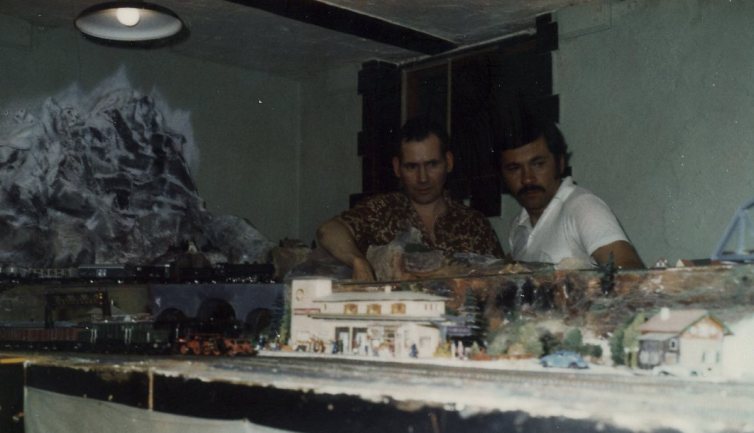 In the next picture is Uncle Frank with my grandpa. Something on the layout is keeping them entertained. The passenger station in the picture, named "Franksburg" for my uncle, was made by grandpa and modeled after station architecture in Europe. Grandpa used special paint on select areas of the station that would glow when the room lights were off and a blue fluorescent light was turned on to simulate moonlight. Grandpa also made a station similar to this one for my train layout. The station on my layout is named "BobJohn's Dump" after my brother and me. 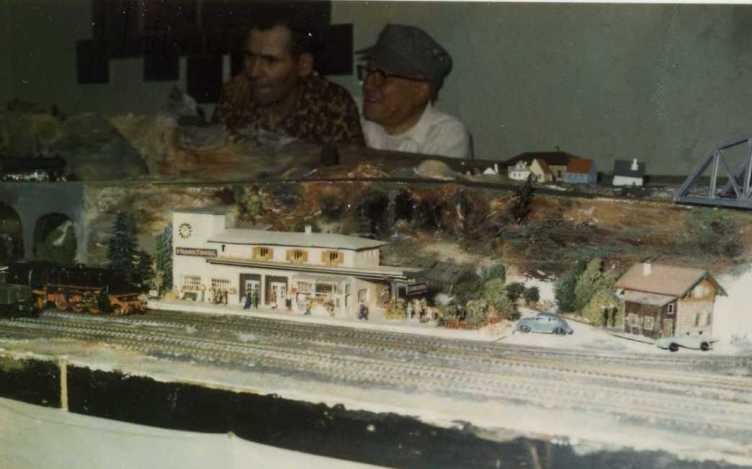